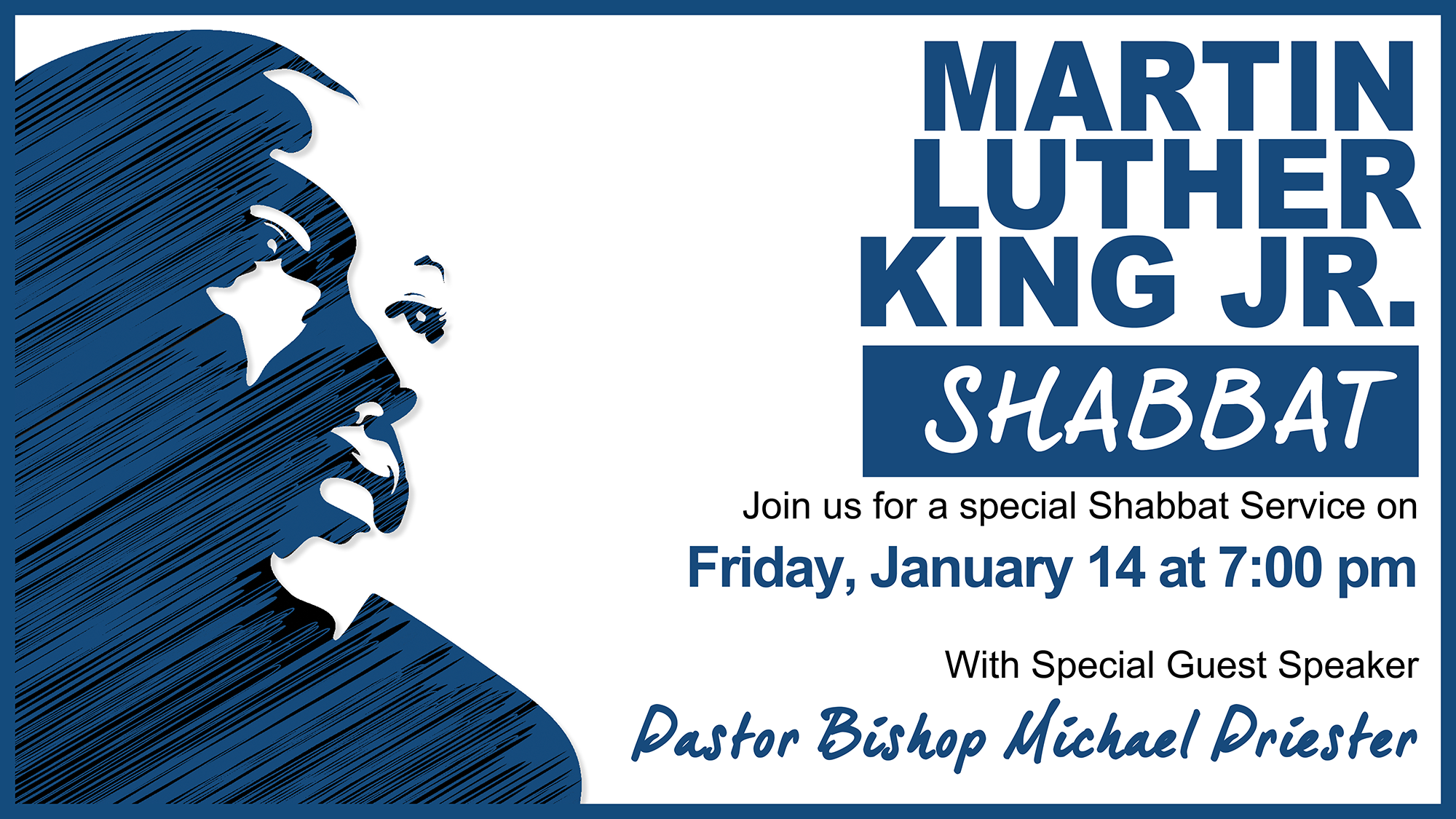 Please join us for a special Shabbat service in honor of Martin Luther King Jr. Let us all come together to create impactful dialogue and work toward the sacred mitzvah of Tikkun Olam, repairing our world. Our guest speaker will be Pastor Bishop Michael Priester, spiritual leader of the Promised Land Baptist Church for 27 years. Shir Chadash will be singing.

Michael Priester is a native of Laurel, MS, married to Jessie L. Priester for forty-one years and blessed with seven beautiful children and nineteen grandchildren.

Michael Priester was called into the ministry at the age of 19 years old and licensed on October 11, 1981; ordained January 16, 1983, and began pastoring January 8, 1984, at the age of 21years old at Christian Valley Baptist Church in Laurel, MS, and New Hopewell Baptist Church in Moss, MS. He served as President of the Youth Mississippi General Missionary Baptist State Convention and attended Mississippi Baptist Theological Seminary, Jackson, MS, and served as Dean of Campus Worship.

Michael Priester earned a Ph.D. in Apologetics and Theology from Trinity Theological Seminary. Currently, Dr. Priester is pursuing a Doctorate in Leadership and Management and will graduate in 2022.

Michael Priester has served as Senior Pastor of Promise Land Baptist Church, Inc. (PLBC), Louisville, KY, since February 21, 1994. Within a few months of his leadership, it was apparent he was a man of vision (Proverbs 9:18). Under his leadership, as Building Project Manager, Michael Priester oversaw the erection of a 37,000 sq. ft. Worship facility with a seating capacity of 1,200, including educational and administrative offices. PLBC took possession (17 years ago) of its beautiful state-of-the-arts facility on November 21, 2004.

Founder of the Little Lambs Child Care Development Center (LLCCDC) located on the PLBC Campus. Pre COVID-19 in 2020, LLCCDC served 100 children from 6 weeks to 12 years old and employed 30 employees. LLCCDC expanded with an additional site to meet the need for quality childcare.

Founder of MJ Ministries, Michael & Jessie Priester’s central objective is to use universal principles of spirituality, offer practical tools for leading a joyous, abundant, and peaceful life, and publish, “Destination Excellence Daily Devotional.” In addition, MJ Ministries teaches people how to envision their destiny in 3-D by discovering, developing and, delivering their God given gifts.

Under the leadership of the International Presiding Bishop, Bishop Paul S. Morton, Sr., Michael Priester served as Kentucky State Overseer and was consecrated as State Bishop on June 28, 2011. Bishop Priester was Coordinator and State Host to the 2013 FGBCF International Conference 20th Anniversary, held in Louisville, with more than fifteen thousand delegates from around the world. This national conference brought in revenue of more than 6.2 million dollars into the city of Louisville, Kentucky.

Michael Priester served on the STVP (Stop Teen Violence Partnership) Board for four years. Also, he served as a Board Member, Facilitator, and Mentor to Convicted Youth Felony (ages 12-17 years) for the Louisville Metro Police Department. Also, Michael Priester served on the Jefferson County Deputy Sherriff’s Merit Board and is currently on the Ecclesia Scholars Society. In addition, he is the Founder and Chief Ranking Instructor of The Ministry of Martial Arts & Fitness and Fighting Tigers of Martial Arts & Fitness Academy. He is a mentor, teaches self-defense, discipline, integrity, and conflict management. Michael Priester has a 10th Degree Black Belt, Great Grandmaster, and was inducted into the BKF Black Karate Hall of Fame on July 28, 2019, in Atlanta, Georgia.

The blessings and favor of God have been bestowed upon this man of God because of support, and life learned lessons of love and determination from his mother, Edna Pugh Priester; grandparents, Mr. & Mrs. LB Priester, Mr. & Mrs. Willie Durr; Uncle Ben Chaney, Father of slain civil rights leader James Chaney, and Father in the ministry the late Dr. J. N. Armstrong.

Michael Priester, a visionary leader, church builder, administrator, evangelist, conference speaker, and teacher. As you see, this man of God is concern and, his heart’s desire is to minister to the trichotomy of man, mind, body, and soul. But, perhaps out of all his gifts, the most impressive one is that of humility and love for his family and community.