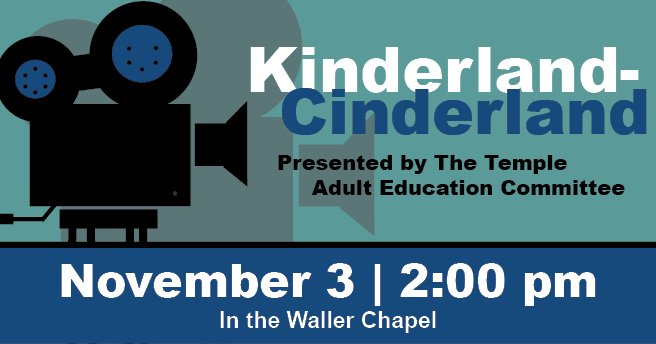 On Sunday November 3, at 2:00 PM, The Temple Adult Education Committee is proud to present a special story/documentary of the experiences of four Jewish school friends living in pre-WWII Germany, Kinderland-Cinderland. Sibylle Tiedemann, the director of the film, will also be here to tell why she made the film. The movie “Kinderland-Cinderland” tells the everyday story of fascism, its banalities, shabbiness and meanness are addressed in the film. Ulm, the city of Albert Einstein and the Scholl siblings become the place where history is felt and experienced.

Twelve women, in their seventies, tell of their youth in this South German city. One of the twelve, Ann Dorzback, is a member of The Temple. Eight of the women are Christian; four of the women are Jewish. Their memories of the same place, during the same period of time, could not be more different. Made with never before seen archive material, this is a touching film of many layers, and has been highly praised by German film critics and viewers.

The film will be shown in the Chapel with Ann Dorzback and Sibylle Tiedemann leading a discussion after the showing. A special reception will be provided.