The first Jewish cemetery in Louisville was the Hebrew Cemetery. When the Congregation of Hebrews became part of Adas Israel, this ground was donated to the new congregation. Adas Israel started its own cemetery in 1859, located on the southwest corner of Preston and Woodbine. In 1873, Adas Israel purchased 15 acres for a new cemetery, on Preston Highway. The old cemetery was not used after 1876, when the new cemetery was opened. In 1924, the last of the old burials from the original Adas Israel cemetery were moved to the new location. In 1955, when I-65 was built, the graves at the old Hebrew Cemetery were moved to Adath Israel Cemetery on Preston Highway.

Although now combined as The Temple Cemetery, it is easy to tell which side was Adath Israel and which side was B’rith Shalom. First, the section designations make it easily distinguishable. The Adath Israel sections are designated by the letter A (for example, A-5) and the B’rith Shalom sections are designated by the letter B (for example, B-6). There is also a noticeable difference in the layout of the cemeteries. The B sections are more symmetrical, laid out in rows, while the A sections, with their more elaborate monuments, are less uniform. 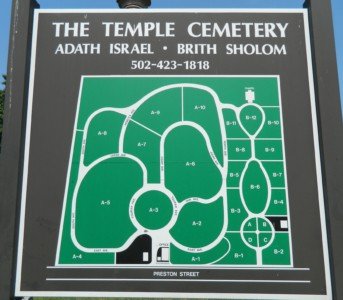 QUESTIONS ABOUT THE CEMETERY?